has a modest population of 17,669 according to the 2010 U.S. Census Bureau report. Small in size, but not in spirit, the town is home to many local boutiques, eateries and inns that give the town its character.

History
If you’re wondering why the name Concord sounds so familiar, there’s a good reason. The Battle of Lexington and Concord was fought here on April 9, 1775 after British troops marched from Boston to Concord. Alerted to the inbound troops by the legendary ride of Paul Revere, locals began to stage an opposition and were poised to retaliate when British troops arrived.
When the British arrived at Concord they encountered armed colonists at Old North Bridge, now a part of Minuteman National Historical Park. Here, a close approximation of the original North Bridge marks the beginning the Revolutionary War.
In neighboring Lexington, the first shots of the American Revolution were fired. Decreed “The Shot Heard ‘Round the World,” this was the first time colonists used aggression toward British soldiers. 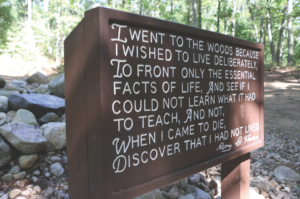 Literature
In the 1800s Concord became the hub for a group of authors known as the Transcendalists, a philosophical movement and literary school based in the belief that divinity lied in the complex relationship of nature and humanity.
Trascendalist Henry David Thoreau went to Walden pond at the recommendation of his friend and fellow transcendalist, Ralph Waldo Emerson. His mission was to live simply, forging a connection between himself and his natural surroundings.
For those interested in retracing the steps of Henry David Thoreau, Walden Pond is a serene destination to visit. On the far side of the pond sits the site of Thoreau’s cabin where he stayed during his two-year experiment to “live deliberately.” Beside a quote from Thoreau’s Walden, visitors to the pond leave short messages on rocks celebrating the human spirit, nature and the work of Thoreau.
One rock reads, “Henry Thoreau: patron saint of rucksack revolutionaries.”
Just outside the town square sits Sleepy Hollow Cemetery, the final resting place of famous authors Nathaniel Hawthorne, Henry David Thoreau, Louisa May Alcott and Ralph Waldo Emerson. Visitors to the cemetery often leave pencils and small mementos at the graves of the renowned writers.

Why Go?
Concord offers visitors a unique experience thanks to its bountiful history, progressive present and optimistic future, which all seem to mingle simultaneously. A weekend trip to this sleepy New England town is tranquil, grounding and informative. For history buffs, literature-lovers or just passers-by, Concord has wisdom to share with all who visit.

Recommendations
Visit Walden pond and the rest of Concord in the fall! The crisp air and vibrant colors only enhance the experience!